It’s soon time for CocoaHeads November, and we’re back at Roamz who kindly provided us space last month also (Check out their new release on the app store!).

After last month’s sombre meeting we have a few exciting things to look forward to!

Speaking for November is CocoaHeads regular Manuel Betancurt talking about Physical computing and the iPhone, sensing and actuating  the world. It will include demo’s of a robotic kit and a very awesome neuron measuring system.

You won’t want to miss it!

I’ll keep my talk on the new core data threading model up my sleeve, but I suspect that Manuel’s talk/demo will prompt enough Q&A to fill the night.

And, as alluded to last month:

December CocoaHeads is in November 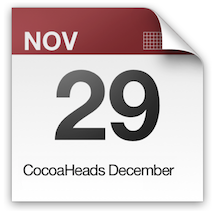 The plan for cashing in on a “million dollar idea” tends to start with step 1, an idea, and end with step 3, profit. The mysterious step 2 turns out to be the hard part, both because it is mysterious, and because it is much, much more complicated than one bullet point will allow.After having a doctor with a flashlight explain where ideas come from, we’ll explore step 2. We’ll start with presenter Mike Lee’s $1,000 an hour idea refinement service. Then we’ll lay out the steps necessary to turn a refined idea into a product…

As space is limited and we expect this to be very popular outside CocoaHeads, you need to register for your (free) ticket. Here are the details: